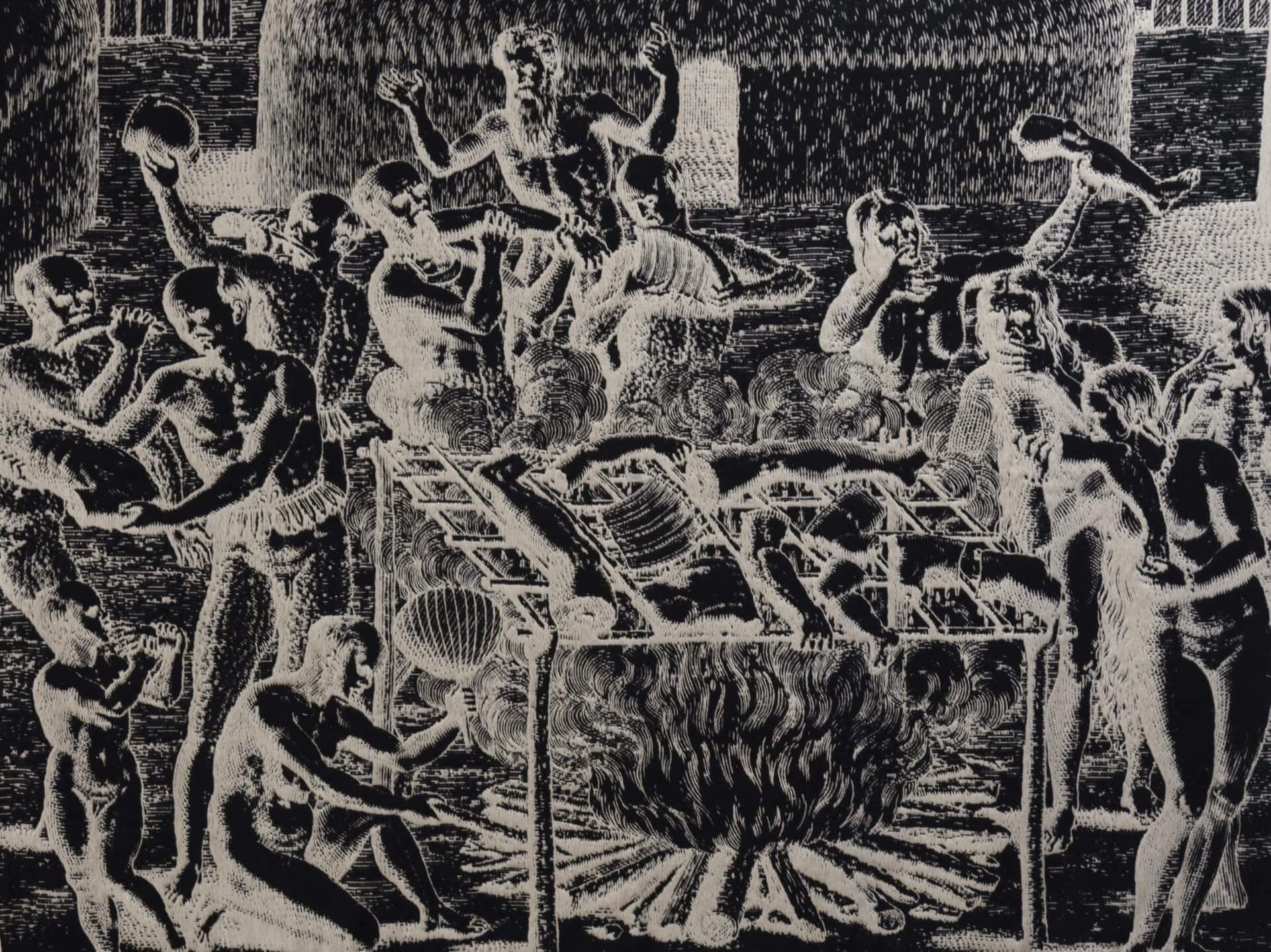 Lívia Melzi offers a visual investigation about the Western representation of Tupinambá cloaks, originally used in anthropophagic rituals by the Tupi warrior tribes who lived along the Brazilian coast. In doing so, she sheds light on the discourses constructed around these objects, which are today relegated to the reserves of European museums, whilst at the same time bringing together French arts de la table, colonial travel stories and cultural anthropophagy.

Lívia Melzi’s practice centres on the archive, on memory and on the construction of identity from quasi-documentary representations. She also engages in a critical interrogation of the production, conservation and circulation of images, and the role they play in the writing of History. Her various projects, that have investigated subjects from the little-known figure of Hercule Florence (a pioneer of photography in Brazil) to the construction of European museum collections, all look at perceptions inherited from the colonial era.

Lívia Melzi in collaboration with Glicéria Tupinambá, Autoportrait, 2022, photography. Courtesy of the artists

The Brazilian artist began in 2018 a research project around Tupinambá cloaks, which originated from the Tupi warrior tribes who were decimated following their first contacts with Europeans in the 16th century. Today, the descendants of the Tupi survive in the threatened rainforests of the Amazon and on the Atlantic coast of Brazil. Only eight of these cloaks, which were originally used for anthropophagic rituals and subsequently brought to Europe in the 17th century, exist today, locked away in the reserves of seven European institutions including the Musée du Quai Branly in Paris. The artist uses photography to document museum displays and discourses that present these sacred outfits in the secular context of the vitrine or the reserve.

From this research, her project at the Palais de Tokyo was first developed in spring 2022 for the seminar “Indigeneity, Hybridity, Anthropophagy (II)”, organised in partnership with the École normale supérieure (Paris). In this context she intervened in dialogue with Eduardo Jorge de Oliveira (Professor of Brazilian studies at the University of Zurich). The artist then gathered for her exhibition in autumn 2022 a set of recent and new works: two photographs of Tupinambá cloaks, both about conservation and restitution; her very first video, made in collaboration with the Brazilian Embassy in Paris; and a collection of tapestries inspired by sixteenth-century engravings that depicted the indigenous people as barbarian, dangerous and cannibal warriors while lending them European traits.

To mark the celebration of the centenary of the “Week of Modern Art”, a literary and artistic event which in 1922 marked the genesis of Brazilian modernism, the title of this exhibition draws on Oswald de Andrade’s Anthropophagic Manifesto, published in 1928 in the wake of the landmark festival. In this text at once poetic, philosophical and political, the author muses: “Tupi or not tupi, that is the question”. This emblematic quote (in English in the original) is as much a celebration of the Tupinambá and their ritual practices as it is a metaphorical example of cannibalism: the text incorporates Shakespeare through reference to Hamlet’s famous monologue, “To be or not to be”.

Winner of the Grand Prix of the 65th Salon de Montrouge

Exhibitions of the season