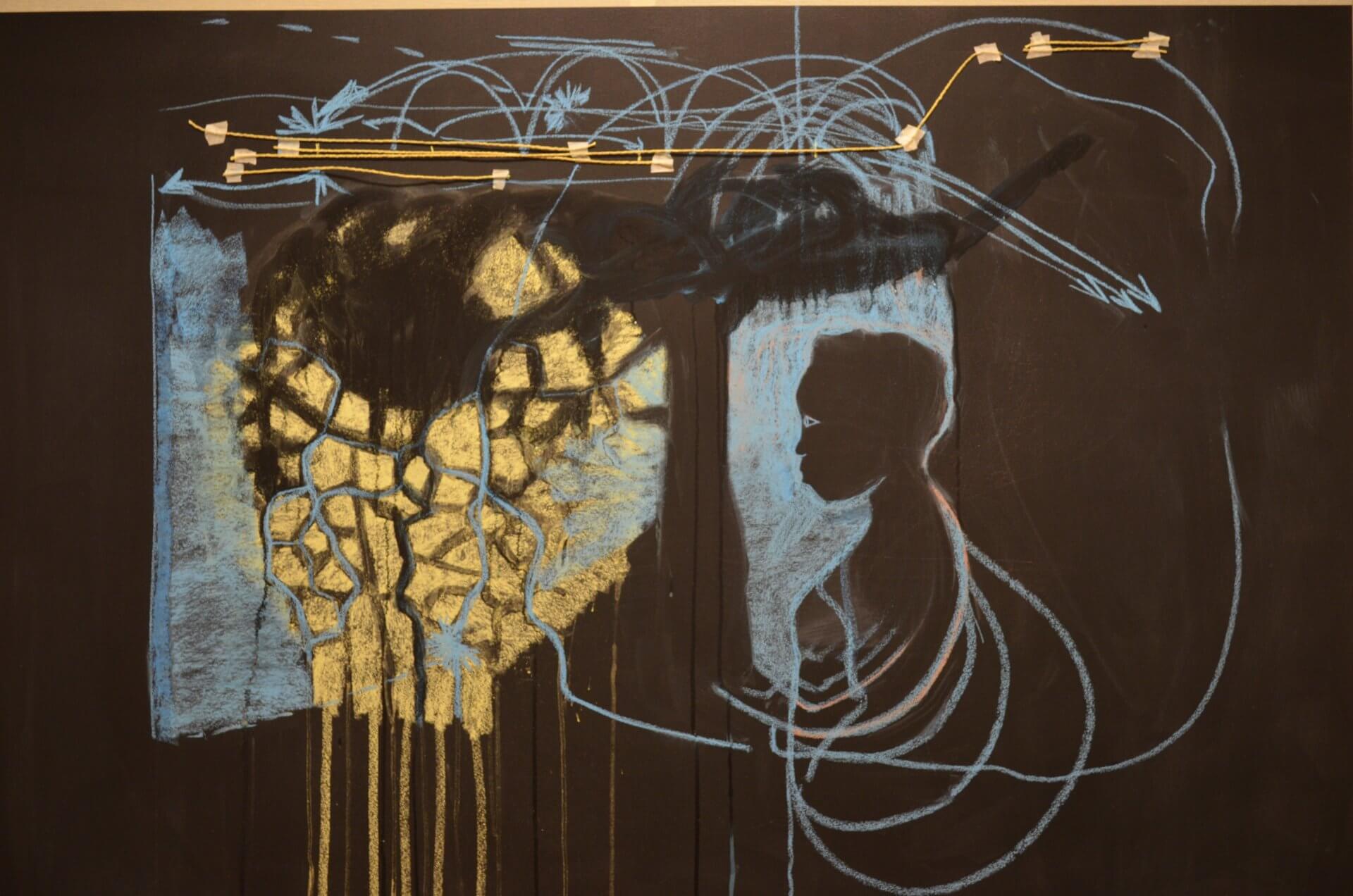 Minia Biabiany, blue spelling, a change of perspective is a change of temporality, 2017. Colour HD Video, 2’22". Courtesy of the artist

“In my practice, weaving brings up the question of entangled narratives. It is a question of putting into words and nourishing an imaginary in which telling one’s story holds a paradoxical place: at once liberated and aggressive, at once feared and silenced.”

In her work, Minia Biabiany questions relationships to territory and places in the Caribbean and Guadeloupean contexts – their poetics, their colonial history, and their present-day existence as a dominated territory under pressure to assimilate. As part of her artistic practice, she develops pedagogical tools that promote autonomous learning, different ways of inhabiting the tensions of this territory, a continuous sensitivity to the places in which she evolves, as well as a dialogue between the many voices that have historically attested to the processes of colonialism in the island region she inhabits. In her work, weaving serves as a paradigm for thinking about the structures of narrative and language that open onto a multiplicity of modes of knowledge, while drawing in space offers a way of actively interacting with one’s own perception. How is the perception of space shaped by our own histories, both physically and mentally? And conversely, how are psychological and mental spaces impacted by the environment around us?

Entitled difé, the Creole word for “fire”, her solo exhibition at the Palais de Tokyo is extended through the installation nuit in the group exhibition Scheherazade, at night. Natural, processed or manufactured materials, realities and fictions, figures and metaphors intermingle and punctuate the spaces of the Palais, at once constraining and orienting the public’s circulation and gaze by imposing a certain slowness on their bodies.

The exhibition difé traces a path between figures of banana trees made of burnt wood and ceramic paths that make up a fragile and moving wall-mounted alphabet. The banana tree evokes the history of Guadeloupe: its brutal exploitation, its monocultures with a view to export, and the ongoing ecocide linked to the use of chlordecone, a pesticide deployed between the 1970s and 1990s in plantations with the complicity of the French state, which still poisons the soil, the water and the inhabitants of the island today. The presence of fire attests to the imaginary anchored of a land transformed by the activity of the volcano La Soufrière, the voice of lava that shifts, extends and transforms: a tender fire that eats away at silence.

Starting from a personal archaeology that imagines the body as a territory of relationships itself caught in a web of relationships, Minia Biabiany transposes a real geographical place marked by a traumatic past into a vast psychological landscape.

In the group exhibition Scheherazade, at night, her installation nuit unfolds across the floor the pattern of the traditional woven creel, a system of traps that the artist brings into dialogue with historical narratives of the island territory, with the voice of the water, with the cemetery-ocean, all of which we find in the video the length of my gaze at night (2022). Suspended at different heights that surpass the scale of the human body, sculptures whose cut-out forms evoke both organic shapes and the characteristics of traditional Guadeloupean architecture have been burned, attesting to the violence of the gradual disappearance of the latter. Playing with different intensities and rhythms through shifting shadows and organic sculptures made of wood and ceramic, the artist creates precarious events that unfold in space. With a striking economy of means and in a mode more perceptive than representational, Minia Biabiany transforms the tensions of the environment in which she lives into an imaginary, poetic and political island landscape. Through interwoven narratives and sensitive and material warps and wefts, she examines the traces of the slave trade and the current colonial situation on bodies and on places.

EXHIBITIONS OF THE SEASON