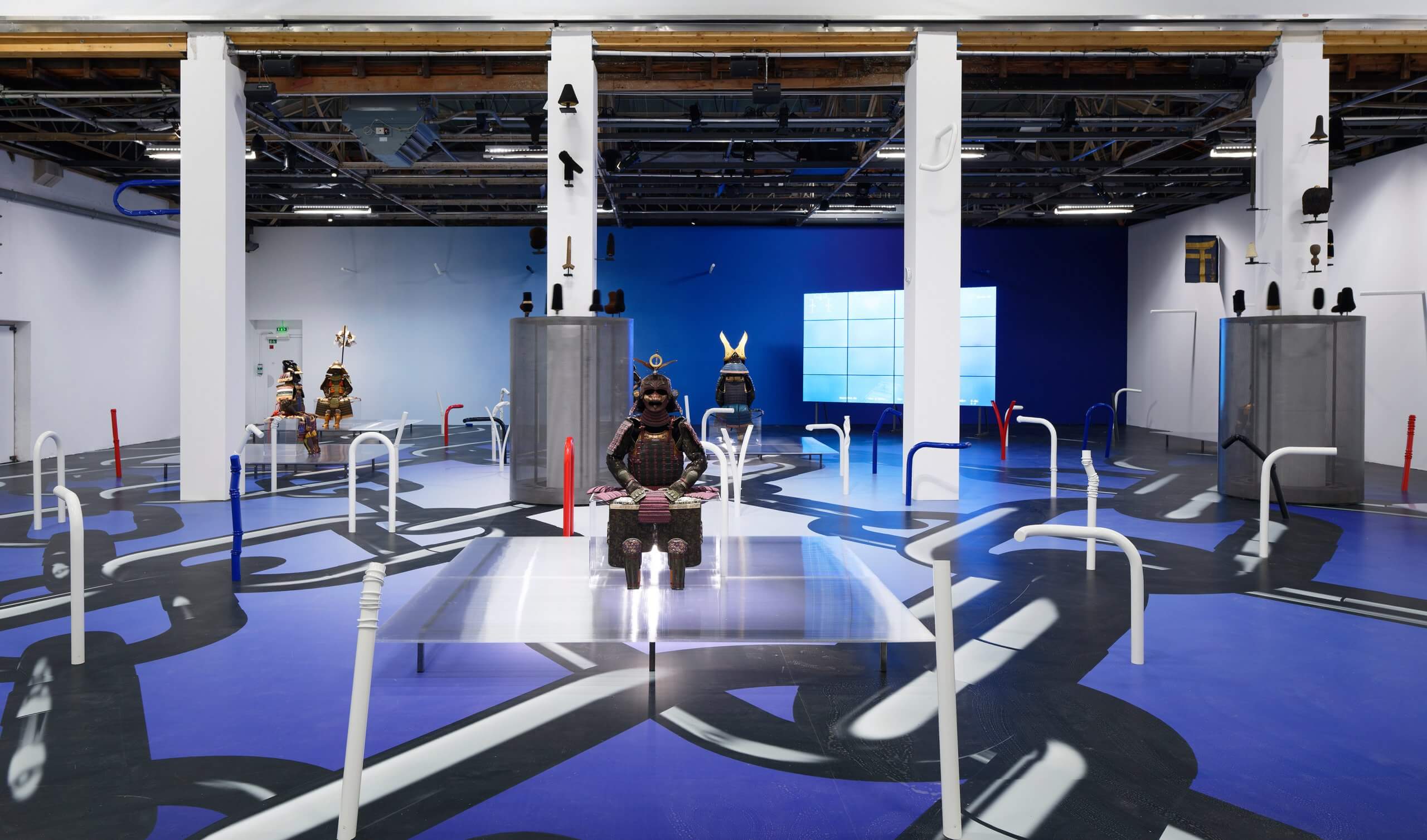 By George Henry Longly
Palais de Tokyo, in partnership for the first time with the Musée national des arts asiatiques – Guimet, presents an exceptional collection of artefacts that belonged to a powerful caste of governors who reigned in Japan between the 12th and 19th centuries: the daimyo.
At Palais de Tokyo: George Henry Longly,The Tissue Equivalent
At Palais de Tokyo, artist George Henry Longly has created an original installation, “The Tissue Equivalent” [Le corps analogue], based on these rarely exhibited masterpieces.
George Henry Longly presents an unsettling sensory experience in a vast arena that plays host to eight suits of daimyo armour, bearskin spear sheaths, and banners. The British artist offers a contemporary perspective on these historical objects which here dialogue with an installation that blends sculpture, video, and sound. Veritable technological masterpieces of their time, the suits of armour enter into resonance with deep-sea research robots that explore the abysses of the ocean. From skin to armour, from the exoskeleton to artificial extensions of the body, the works of George Henry Longly and the daimyo artifacts connect through the prisms of history, science, and phenomenology.
Paying close attention to systems of display, be they museological, theatrical or commercial, George Henry Longly presents a shifting environment that skirts and sidesteps our every attempt to apprehend it.In this installation, the artist brings together popular culture and the collective unconscious whilst drawing inspiration from a synthetic material that imitates the cellular tissue of the human body. Sculpted into the form of limbs or torsos, this material has previously been launched by scientists beyond Earth’s atmosphere in order to test the levels of radiation to which the body would be exposed in outer space. In a similar fashion, “The Tissue Equivalent” exposes visitors to distortions and oscillations, forces which modify their perception of the exhibition space and of the works and historical Japanese objects to which it plays host.
Curator: Adélaïde Blanc
Scientific consultant : Jean-Christophe Charbonnier

The daimyo class played an essential role in Japanese history in the second half of the feudal era (from the 15th century to the 19th century). This exhibition brings together for the first time an exceptional ensemble of pieces from private and public collections in France. A total of 33 suits of armour are joined by sumptuous ornaments associated with Japanese warriors, including helmets, weapons and textiles. Presented across two sites – the Hotel d’Heidelbach and the fourth-floor rotunda of the main museum – the two chapters of this spectacular display unveil masterpieces that express the power and command of the warrior and animate the exhibition spaces. Armour and ornaments – many of which are on display for the first time – plunge us into an immersive fresco of military history, replete with the trappings of power and the legends of Japan’s great feudal lords.

Open every day except Tuesdays, from noon until midnight
#GeorgeHenryLongly
Buy tickets

“Everything that holds the artifact, the mechanics of display, changes the object and the understanding that we have of it.” George Henry Longly

This exhibition benefits from the support of