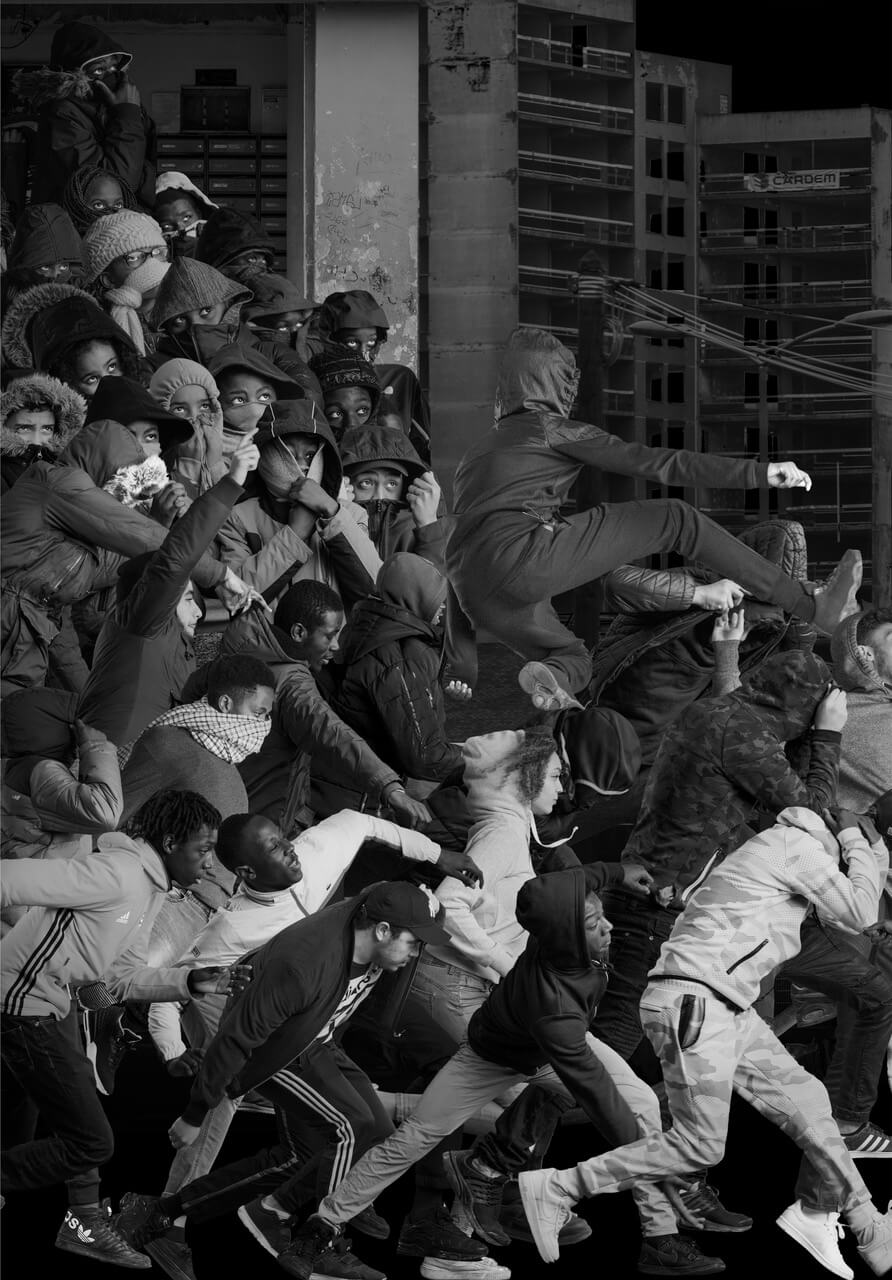 Chronicles of Clichy-Montfermeil
For his third intervention at Palais de Tokyo, JR is unveiling a monumental fresco of over 150 m2, forming a singular portrait of the inhabitants of Clichy-Montfermeil (Seine-Saint-Denis), towns where the popular rebellions that shook France in 2005 began. After being displayed at Palais de Tokyo, the work will then be installed durably at the Cité des Bosquets (Montfermeil).
On October 27 2005, the dramatic deaths of the young Zyed Benna and Bouna Traoré, electrocuted as they attempted to flee from a stop-and-search, marked the beginning of an unprecedented conflagration in French suburbs, which were placed in a state of emergency. One year earlier, the artist JR had initiated his “Portrait of a Generation” project, a series of portraits of the inhabitants of Les Bosquets which he stuck up in a large black-and-white format on the neighbourhood’s walls. Thus, these portraits appeared as a backdrop to the rebellion. As JR recalls: “it was the first time that I became aware of the impact of images and decided to control their distribution by producing photographs that could only be used to communicate an artistic project”. So JR returned to the heart of the town of Les Bosquets to photograph its grimacing inhabitants: “at the time, journalists were coming to photograph the rioters using telephoto lenses, like voyeurs, and often had to leave empty-handed. As for me, I used 28mm portraits, with a lens that meant you had to be very close to your subjects and which deformed faces just as the media deform our vision of the suburbs”, JR explains. He then stuck up these portraits in XXL format on the walls of Paris, indicating on each occasion the names and addresses of his models. For JR, photography is a weapon which can form images of invisible people, while fighting against media clichés.

In 2014, JR staged a ballet telling the story of the riots and the life of Ladj Ly, an ally right from the beginning. Bodies under tension, police chases and Molotov cocktails then became classic in their reinterpretation by Lil Buck, the dancer Lauren Lovette and the 42 members of the New York City Ballet. JR then extended this experience by producing a short film of the same name, shot in Les Bosquets, on original music by Hans Zimmer, Woodkid, Pharrell Williams and Ben Walfish.

Since December 2016, JR has photographed, with the help of his associate Ladj Ly, over 700 inhabitants, workers and passers-by in Clichy-Montfermeil, while asking them to play back moments from their everyday lives, which he then presents in a huge, epic fresco, with a rhythm reminiscent of paintings by Diego Rivera (1886 – 1957), the artist who celebrated the history of the Mexican people in his politically motivated murals. From the neighbourhood’s mums and dads, it also takes in firemen, dealers, social workers, owners of cafés, the participants in the riots, dancers, big brothers who have turned religious, the mayors of Clichy and Montfermeil, young people studying to take entrance exams to prestigious schools, while dreaming of a future in politics, and others who defend their territory and refuse to leave it. JR thus deploys the face and memories of those inhabitants who have lived through the failure of the utopia of Clichy-Montfermeil, its unemployment, its drugs, its social revolts and urban mutations, from the Projet de Rénovation Urbaine which started in 2012, to the creation of the “Médicis Clichy Montfermeil” project. In 2017, the fresco will be unveiled at Palais de Tokyo with a new documentary film co-directed with Ladj Ly, thus marking two new steps in this long-term project about the memory of Clichy-Montfermeil.

Open every day except Tuesdays, from noon until midnight.
Buy tickets

“I’ve been going regularly to Clichy-Montfermeil for more than fifteen years, with my friend the filmmaker Ladj Ly. As soon as I imagine that I know this town by heart, it then been totally metamorphoses, and it is always brimming over with life. My work is linked to architecture: an architecture that can unite just as it can enclose. This fresco forms an image of Clichy-Montfermeil made up of portraits of different generations who have seen the utopia of this neighbourhood fall apart, with poverty and social tensions worsening to such an extent that, after the deaths of two teenagers, Zyed and Bouna, in 2005, it became the trigger point of the biggest riots in French history. It is a portrait of those who strive to put poetry back into cement.” JR