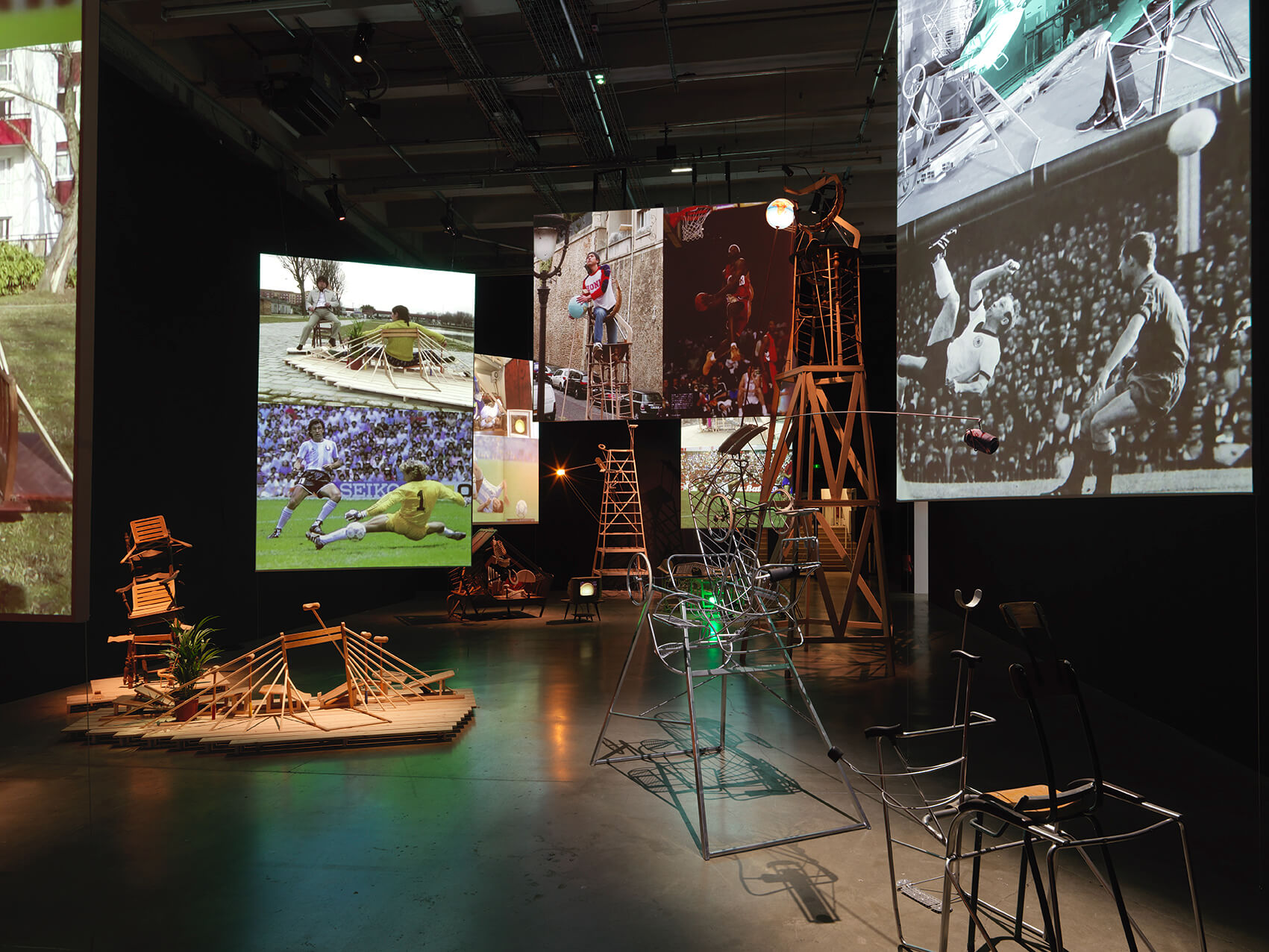 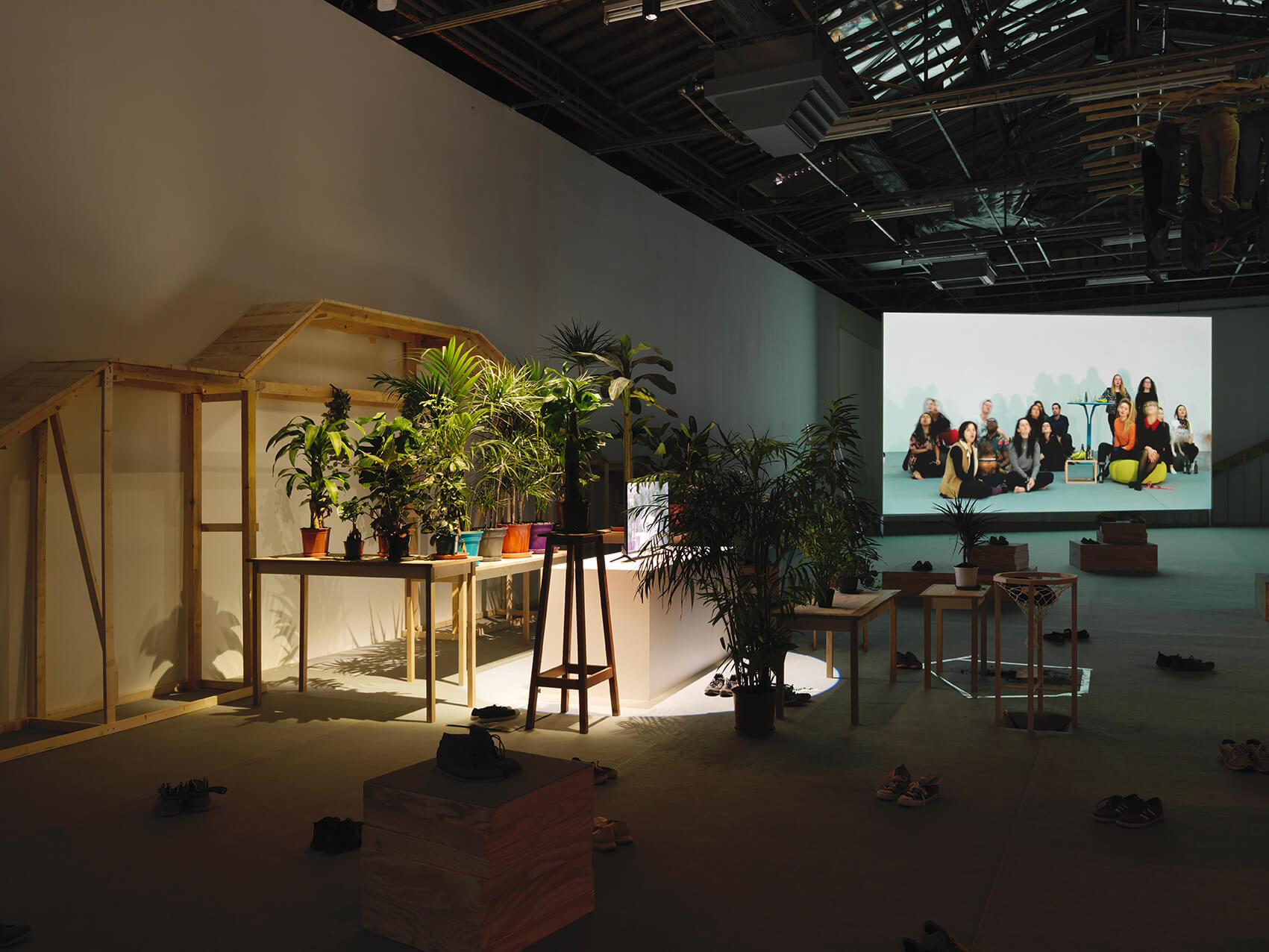 Pan
Palais de Tokyo is presenting the first large-scale solo show in France by Taro Izumi.
In Japan, Taro Izumi is a singular artist. He has developed a world which is expressed in installations, sculptures and videos, whose appearance processes are associated with accidents, play or perturbation.
The installations that he constructs from ludic hypotheses are a source of forms, sculptures and murals which, often thanks to their absurdity, become extraordinarily unexpected items that humorously thwart our artistic and social customs. For example, the invention of mounts composed of everyday elements – chairs, tables, stools, cushions – which are rapidly assembled so as to welcome a body imitating the vigour of a sportsman in action, leads to something which is at once astonishing, a parody of the dream bodies of stadium heroes and a fascinating commentary on the history of the plinth in sculpture.
Curator: Jean de Loisy
2017 SAM Art Projects resident

To be discovered in the exhibition, in the order of the visit:

To forget the day that I forgot to wear sunscreen, 2017
“Every day, I filmed a brick in a wall until night fall. Each time, it’s the same brick, but each time is a different moment. I waited while filming, just as bricks wait in a wall.” Taro Izumi then put together digitally these hundreds of shots, one after the other, composing his film stone by stone, from the bottom to the top, as a mason builds an edifice. The projection of a wall, on a wall: more mischievous than inhospitable, this work, which welcomes visitors to the show, reveals Taro Izumi’s taste for the gap between things and their depictions, objects and their images.

Nine pieces from the series “Tickled in a dream… maybe?”, 2017
In this series of works, combining sculptures, photographs and videos, Taro Izumi has produced media made up of everyday items – chairs, tables, stools, cushions – which are rapidly associated so as to support a body imitating the unwinding or the impulsion of a sportsperson in action. “It’s a kind of architecture aimed at images or videos. (…) Here, I’ve tried to rethink the architecture meant for pictures, to make the body’s volume conform to the rules of imagistic representation, to differentiate the passing of time in a flow from broken-up time, to give back volume to a compressed world, and to look for a living structure in a flat surface…”

Fish that have melted become water, 2017
In the exhibition space, two screens show the filming of a performance. A performer keeps pressed down the tip of a can of spray paint, while moving alongside the walls of the show. Minor obstacles get in the way, thus modifying the path of the line. Meanwhile, a second performer follows closely, carefully wiping out everything that has been painted. “This line is the natural environment of the entire exhibition space. It reproduces the movement of a wave in the sea.”

Inhale the shadow, 2017
In a basket, some fruit decays from day to day. Paint is regularly put directly on these fruits so as to conceal their aging.

30, 2017
This video shows several people imitating the hurling of a wolf.

A watchdog behind the Adam’s apple barks at the stomach, 2017
Shown in a cage, two videos present an English teacher and a parrot perched on a telephone. The work’s soundtrack consists of an imitation of bird’s song done by the artist himself. “All an artist does is to repeat the world, without necessarily understanding it.”

“Beautiful assistant” series, 2017
These videos show Taro Izumi’s assistants in different situation. “I’m often more interested in what’s going on behind in a video, than in the main subject. It can even happen that the role adopted by an assistant is the one that people notice first. (…) ‘Beautiful assistant’ reveals the star hidden inside each assistant.”

The piercing wink of the star that is not visible, 2017
Four archers from the club Les Archers de Paris have inscribed the letters “EELS ”on the wall, by shooting arrows whose tips have been covered with pieces of cloth soaking in differently coloured inks. “Archery is a sport in which points are scored thanks to the quality of the arrow’s trajectory, as well as the strength used so as to resist gravity. But an eel has a movement which is contrary to a straight line. This is something that can easily be seen by watching it move from above.”

Worms can differentiate between the laughter and cries of locusts, 2017
Connected with several of Taro Izumi’s flagship themes – including the overturning of things, and the individual’s place in society – this large installation includes several dozen performers, whose legs have been trapped in a vast structure, at the exhibition’s opening night and in a video projection during all the exhibition. “I always try to immobilise things in a world in motion.”

#TaroIzumi
Open every day except Tuesdays, from noon until midnight.
Buy tickets

“Everyday objects stand out as my favourite working materials. When misappropriated from their functions, they become artistic objects; we are in fact living in a world in which all values can easily be overturned.” Taro Izumi Interview with Paloma Blanchet Hidalgo, Slash/Magazine, February 2013

This exhibition is coproduced with

It benefits from the support of