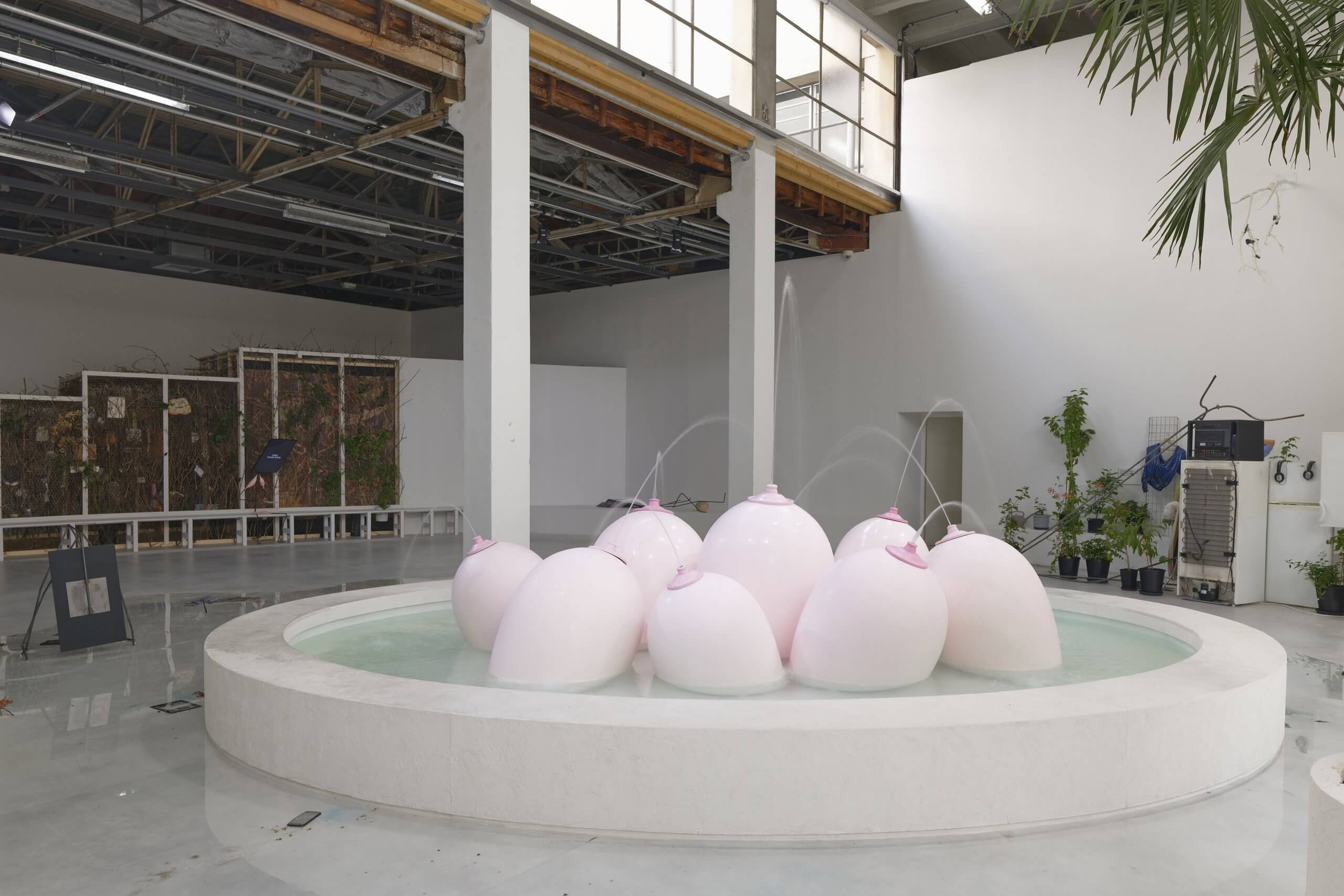 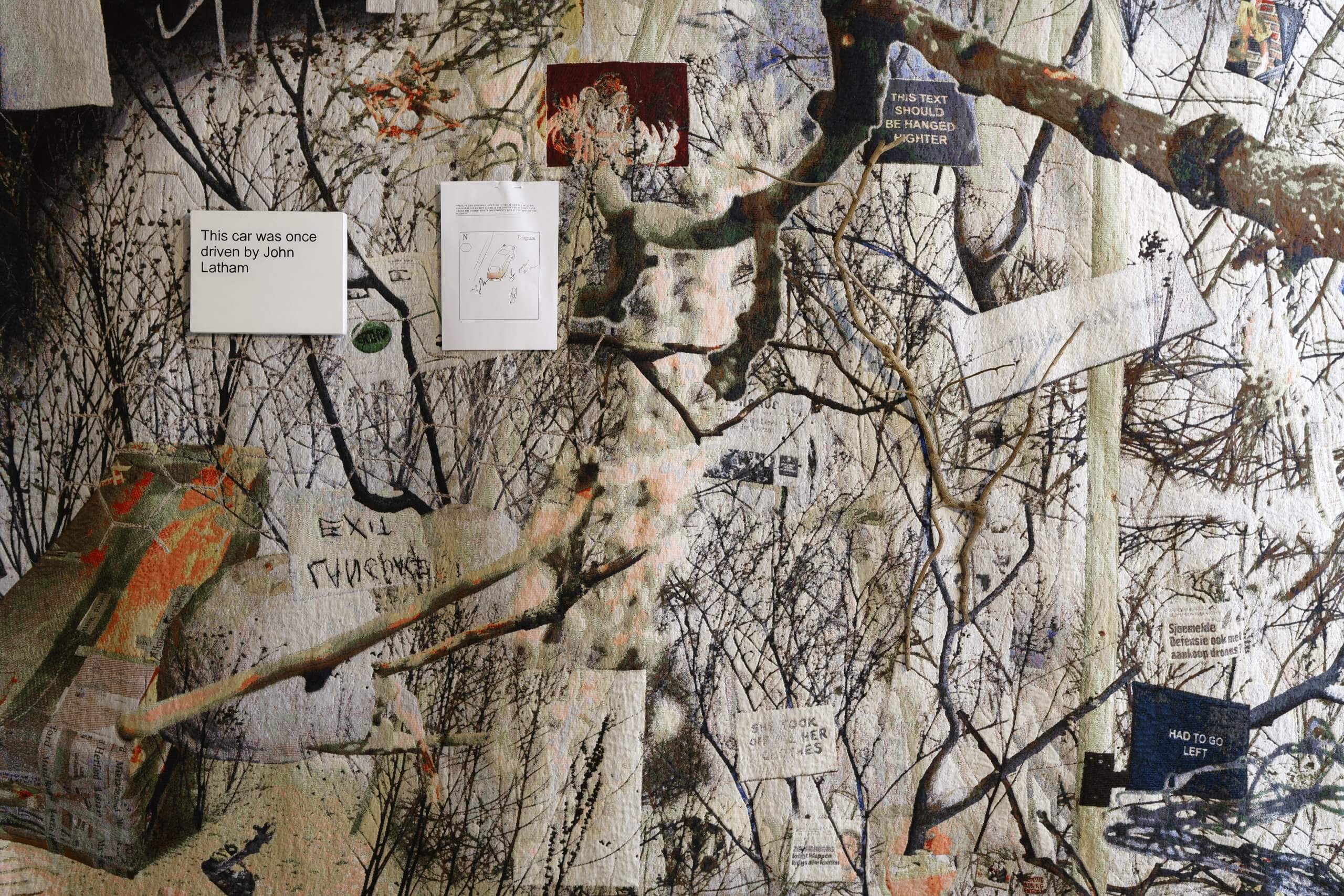 Ring, Sing and Drink for Trespassing
For her first solo show in a Parisian institution, Laure Prouvost presents “Ring, Sing and Drink for Trespassing”; an exhibition manifesting as an escape that is both psychological and geographical. The Palais de Tokyo is transformed into a space where nature is purported to have taken over from humanity. Inspired by global warming, the exhibition invites us to explore and celebrate ambiguity by being at once intimate and expansive. Messages elsewhere spill over from the confines of the exhibition: “IDEALLY THIS PLANT WOULD GROW BOOBS AND PRODUCE MILK” or “IDEALLY HERE WOULD BE A SMALL CRACK IN THE WALL YOU COULD PASS THROUGH” in a demonstration of cognitive delinquency for both language and space. Through these multiplying and concertinaing viewpoints, “Ring, Sing and Drink for Trespassing” operates as an ode to diagonal lines, the transcending of limits and the joy of slipping over a fence to discover a wasteland. Or, a now-abandoned but marvelous garden, in which the artist has discovered a forgotten dystopic biological laboratory.
Upending traditional conventions of exhibition access, a curved corridor covered in woven tapestries invites you to enter an unknown territory. This evolves into a metallic network of manufactured objects, interwoven with branches, car mirrors, raspberries, collages, newspaper clips and vases in the shapes of bottoms with flowers a first indication that nature is annexing the building’s architecture and that the outside world has lodged itself into the interstices of this place. At the center of the exhibition, a large fountain of breasts is waiting to feed you. This appears as a respite, a place where the viewer can reflect after discovering the atypical panoramas conceived by the artist. A new video work is also shown, which reflexively incorporates some of the physical elements present in the exhibition.

In “Ring, Sing and Drink for Trespassing” Laure Prouvost, more than presenting anthropomorphized objects, creates a cast of characters with whom you share the assembly. Characters with flat screen TV and mirror faces, branches with mammalian outgrowths or buttock implants and fruits and vegetables topped up with GMOs as well as other elements claim their agency via prosopopoeic means and become arbiters for the mechanisms of culture. Responding to these cues the viewer engages with these artworks with often humorous outcomes as they are exposed as the lead protagonist in the landscape of possible scenarios. Subsequently this immersive installation forces us to reconsider our viewpoints and our understanding of the world at large.

A monographic book published by Palais de Tokyo is accompanying this show.

Open every day except Tuesdays, from noon until midnight.
#LaureProuvost

“As an artist, I often like to lose control, just allude to certain things, so that everyone can form their own interpretation. The spectators should find in themselves a sense of their own environment and use their imaginations. I play with the idea of being whisked away to places which you maybe can’t come back from.” Laure Prouvost

This exhibition benefits from the support of