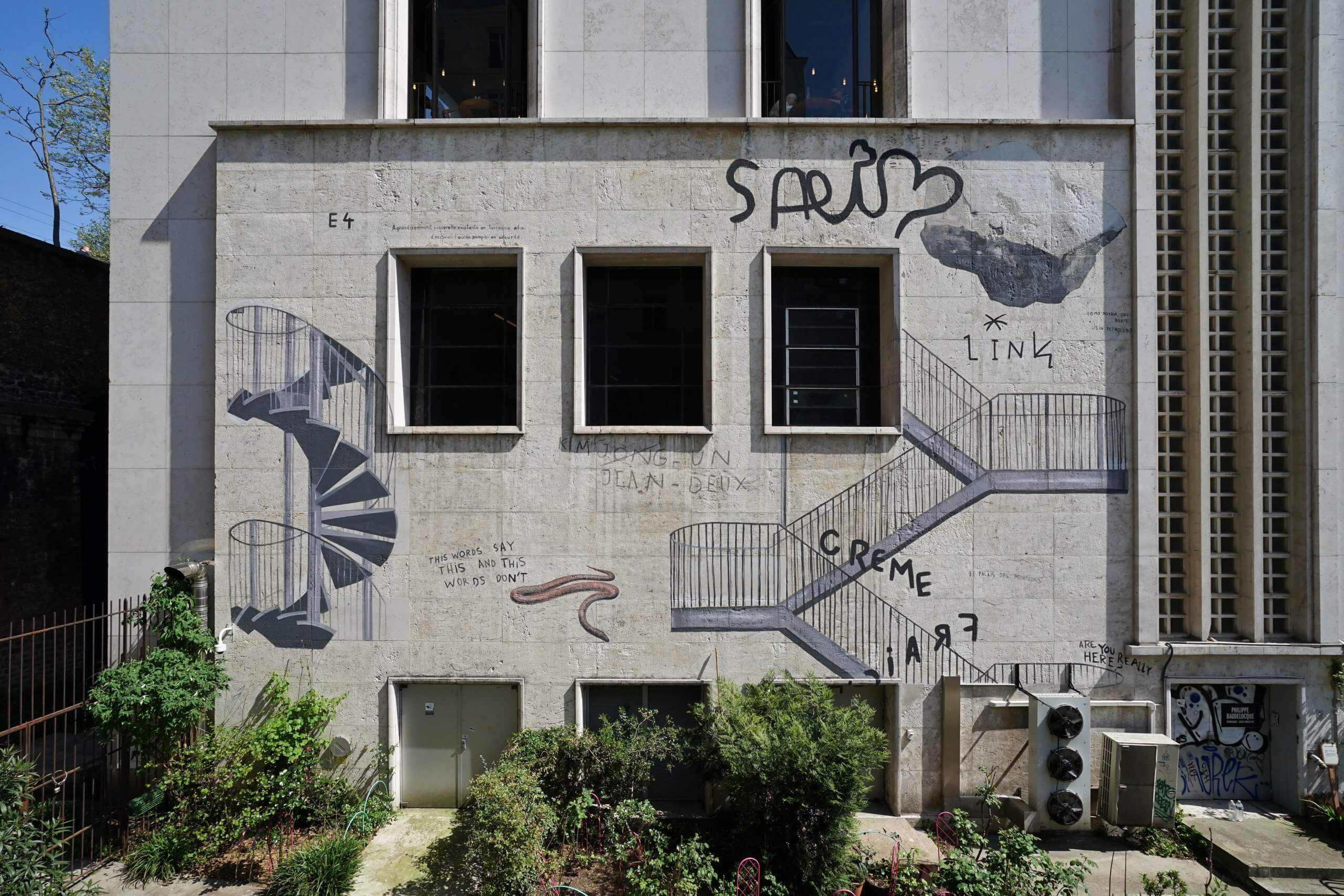 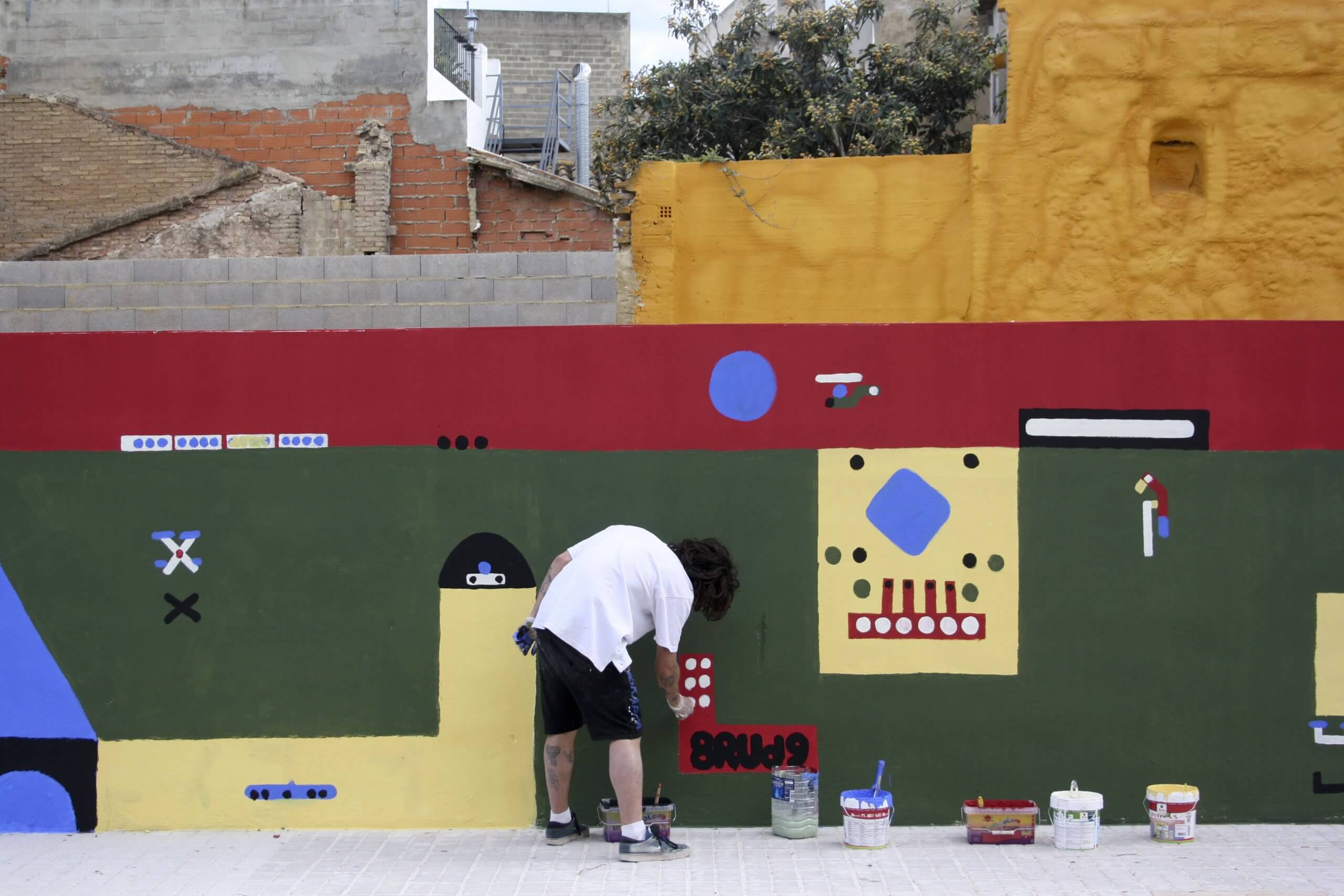 For the tenth session of the LASCO PROJECT, Palais de Tokyo is examining the history and heritage of May 68, with a monumental intervention on the building produced by the artist Escif, in which he in particular reproduces the famous slogans of revolt coined by the students in this movement. This project is being added to the one produced in July by the Greek painter Stelios Faitakis which, in two mural frescoes, questioned the heritage of Situationist thought and of May 68 in contemporary revolts.
These works are set in the context of the LASCO Project, Palais de Tokyo’s urban arts programme, which is deployed in its building with contributions by almost sixty international artists.
This journey is being extended into the basements of Palais de Tokyo with a new intervention by the artist Paul Loubet, the winner of the Révélation d’Art Urbain prize, awarded by the ADAGP (2017).
Escif, Open borders
As part of the Lasco Project, Palais de Tokyo has invited the artist Escif to create a monumental painting on the rear façade of the building. Escif will reproduce the slogans that accompanied the May 68 student uprisings alongside graffiti scrawled by visitors in the toilets of the Palais, whilst transforming elements of the façade (doors, fire escapes, flags) into trompe l’oeil.
The overall composition of the painting will recall the board game Snakes and Ladders, in which players make thread their way between vice and virtue. Escif looks to return graffiti to the street by questioning the dose of politics and of situationism that inform the act of writing on walls – a practice that links the first cave drawings to today’s streets and underground passages – whilst giving form to one of Duchamp’s famous aphorisms according to which “art is a game between all people of all periods.”
Paul Loubet
Paul Loubet is taking over the basements of Palais de Tokyo to present a futuristic cave, evoking Egyptian sanctuaries and space ships, mixed with the kitsch of the graphics of flyers for 1990 rave-parties, along with the heritage of comics, art brut or else the 8-bit video games that characterised the 1980s. Ever between pixels, and patterns from poorly made wallpaper, Paul Loubet deploys a smoky penumbra of cryptic geometric signs, as a series of strange pictograms depicting drones.
Curator: Hugo Vitrani

Initiated in 2012, the LASCO PROJECT, in the underground pathways of the building of Palais de Tokyo, reveals one of the most astonishing journeys through urban art in a cultural site. Almost sixty international artists, who have placed the street in the history of art, have thus produced pieces, some of which are monumental, while others are secret, confronting the plain architecture of Palais de Tokyo and infiltrating its interstices (corridors, stairways, passages) across almost 1 kilometre.

Escif’s work will be visible on the façade of Palais de Tokyo, from the Rue de la Manutention side.
Paul Loubet’s piece will be placed in the basements of Palais de Tokyo and accessible as part of a visit to the Lasco Project.
Access on presentation of an entry ticket to the exhibitions, with no prior reservation.
2 € in addition to an entry ticket to the exhibitions.
Buy tickets
Guided tours

“A painted wall is an erased wall, it is a crack in the system, it is a message of hope that reveals the possibility of working towards a better world: open the borders.” Escif

Lasco Project benefits from the support of: